Abuut the new managing entity of the Izu Peninsula UGGp

The Izu Peninsula UGGp has greatly strengthened its managing entity on the occasion of the ten-year anniversary of its establishment.

First, the new entity has earned a juridical personality under the domestic legal system. The previous organization—the Izu Peninsula Geopark Promotion Council—was legally considered a “volunteer group”. The consolidation of the Tourism Bureau, which had already acquired a legal personality, and the Geopark Council into one entity was primarily aimed at surmounting the drawbacks of the latter.

The establishment of the new entity advances the long-standing aspirations of the local populace. The former Tourism Bureau, which used to be known as the “Creation Centre”, had been originally established as a flagship institute to lay down a holistic strategy to revitalize the regional economy and strengthen its civil society. However, the organization could not fulfil this mission and gradually narrowed its scope to tourism promotion; later, it was renamed the Izu Peninsula Tourism Bureau. Its merger with the Geopark Promotion Council decisively revived the initial idealism of the organization. The greater bureau will contribute to the tenets of the Global Geopark Network and introduce sustainability to the tourism sector of the peninsula. This endeavor has the support of all the mayors in this region.

In addition, the consolidation has tremendously strengthened our competence in terms of marketing and promotion. The Chief Operational Officer of the former tourism bureau, who has four decades of experience running a private tourism agency, has been actively engaged in the promotion of Geo-tourism since the launch of the new entity. The network of the tourism bureau is widely extended to include the private sector. This network is undeniably beneficial to the endeavors of our new entity. 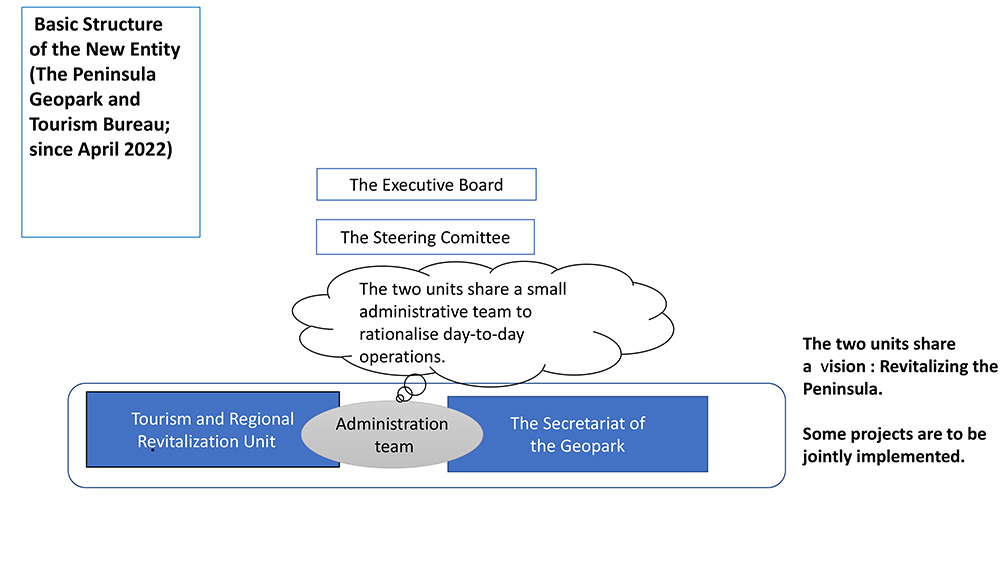